The Peculiar Children Wiki
Register
Don't have an account?
Sign In
Advertisement
in: Characters, Peculiars, Males,
and 7 more
English

Abraham "Abe" Ezra Portman was the grandfather of Jacob Portman, the book's main character. He had the ability to see hollowgasts, a peculiar trait that Jacob also inherited. His son Franklin Portman did not inherit his peculiarity.

Abraham was killed by the hollowgast Malthus.

Abraham is a Polish Jew who escaped Nazi persecution during the Second World War.

Abraham was most likely the most popular child in the home, having made many friends including Enoch O'Connor.

Abraham fought in the Hollow Wars, meeting Myron Bentham, who he became close friends with. Myron saw the importance of Abraham's soul and stole it. Abraham felt shame from the loss of his soul and left for America, where he later married and had two children.

Abraham Portman died at the hands of a Hollowgast named Malthus. He was particularly worried when he called Jacob Portman (his grandson) and asked for the key because the monsters were coming. Jacob believed he was having another paranoia attack. Abraham ran outside to the woods behind his house and was attacked by Malthus, however the police declared it a wild animal attack. Malthus severely injured Abraham, but didn't have time to feast on his body, because Jacob and Ricky arrived.

Abraham appears to Jacob in a dream, in the boxing ring with a hollow. The hollow lunges forward, and he knocks it away with the hilt of his knife. He begins to speak to Jacob, who is sitting in the sidelines. Abraham explains the hollow can be tamed, and begins to talk to the hollow, sending it into a weak daze. Abraham lunges forward to deliver the killing blow when the hollow slashes through the air with its tongue, knocking Abraham away, and the hollow stands over him, preparing to deliver the killing blow. Jacob then wakes up.

The Conference of the Birds

While crossing into V's loop, Jacob dreams about Abe: he saw Abe in his bathrobe holding a flashlight. Jacob tries to yell at him to stop and go back, but it comes out in hollowspeak, and Abe looks frightened and angry at the sight of him. Abe says to stop, and plunges a letter opener into Jacob's shoulder. Pain takes Jacob out of the dream.

Abraham, like his grandson, had the ability to see, sense, and control hollowgasts. Abe could also see and access the peculiar soul jars in the Library of Souls. His ability to control hollows comes from his descending from ancient, tri-tongued peculiars similar to modern hollows (although they were not soulless). However, according to Bentham, Abe's ancestors' remnant is stronger in Jacob.

Jacob is Abraham's grandson, to whom he told his story of his time spent in Miss Peregrine's Home for Peculiar Children and about the peculiar children who resided there.

He was very insistent that Jacob believes him, as he was aware of Jacob's peculiarity, he himself sharing the talent. His stories led to Jacob's eventual discovery of the home. By the time of The Desolations of Devil's Acre, Jacob states that he used to really miss his grandfather, wanting to talk to him and show him who Jacob was becoming to make him proud. However, soon Jacob found that what he thought of himself is more important than what Abe would have thought, and started to move on. He still misses his grandfather as a "low, background kind of ache," but now thinks it better that Abe "stays gone."

Abraham's son and daughter, though they were not close. Jacob describes the story of how when his father was five and had never been trick-or-treating, Abraham promised to take him as soon as he got off of work. Alas, Abe failed to keep his promise which resulted in the photograph shown on the left, taken by Abraham's wife. Franklin also reveals that he never tried to get close to his father or learn about his secrets because he was afraid of what he'd uncover.

Abraham Portman was once in love with Emma. They met at Miss Peregrine's Home for Peculiar Children. Despite his feelings towards Emma, Abe insisted he had to go to war to fight and afterwards, to fight hollowgasts and wights. They wrote many letters during the war. At first they were cute, such as "Remind you of something? To my bombshell! Love, Abe." And "Peeling spuds & dreaming of you. Come home soon. Love, your potato". But afterwards becoming more and more depressing such as "Feeling caged without you. Won't you write? I worry so. Kisses, Emma". The fateful last letter contained three words "This is why" along with a snapshot of Abraham holding his daughter, Jacob's Aunt Susie. That ended the love story of Emma and Abe. Afterwards when Franklin and Susie were young they found a letter that they believed was from a mistress, calling it "seedy, lipstick in the collar type stuff" but in reality it was from Emma. Horrified by what they had found, they tore it up and flushed it down the toilet.

More than half a century later, Emma was still not over her love for him, and it was the actual reason why she fell for Jacob. But when she tries to call Abe on the road during A Map of Days, he angrily tells her she is interrupting dinner and that she shouldn't have called before hanging up, hurting her feelings. However, she tells Jacob in The Conference of the Birds that she needed to hear it, so she could finally let him go. 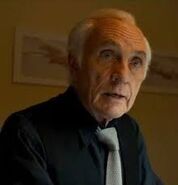