The Peculiar Children Wiki
Register
Don't have an account?
Sign In
Advertisement
in: Characters, Males, Invisibles,
and 7 more
English

Millard Nullings is a male peculiar with the peculiarity of being invisible. He is also a scholar of all things peculiar.

Millard is first mentioned in the prologue by Abraham Portman. He appears next in chapter five talking to Emma after capturing Jacob. He is the first peculiar that Jacob formally met, although Emma is the first peculiar he saw. Millard used his knowledge of everything that happens on the island to help get himself, Emma, and Jacob back to the house safely.

In chapter ten, Millard uses his invisibility to hide from Golan when he takes Miss Peregrine and Miss Avocet. He then follows Golan to the Lighthouse. After Jacob, Emma, and Bronwyn catch up with him he volunteers to try and distract Golan, but got somehow got shot in the process. Bronwyn tended to him after that. It is assumed that he was in a boat with Hugh after they defeated Golan, and retrieved Miss Peregrine.

Picking up from where the first book left off, Hollow City begins with the children lost at sea. Millard is first mentioned helping correct Emma's navigation as they sail away from Cairnholm following it's destruction. Soon a storm hits, causing his loop atlas the Map of Days to be lost at sea. Millard is devastated, as it was a very rare artefact (one of five) and one of his most prized possessions.

When they reach land and spot the submarine hunters searching the beach, it is presumed that they are wights hunting them. They try to subtly hide their boats, but leave tracks. Millard strips off his bandages for the sake of not being seen and covers the tracks, but his wound begins bleeding once again. Although he tries to stop her, Emma burns his wound closed and immediately worries about the injury scarring, obviously not an issue an invisible should worry about. He sulks for a while after.

When Claire begs for another story while hiding from wights, Millard expresses his aggravation toward the Peculiar Tales. But, when they prove to have logical clues toward loops, he changes his mind completely, using the book through out the rest of the story.

Finding the loop hidden in the mouth of the stone "giant", Cuthbert, Millard is quite sure it is only a coincidence, but, once inside, he changes his mind, becoming quite excited that there may be truth in fiction.

When the hollow is found in the loop, it is he who explains that the monsters have evolved something similar to peculiarities, allowing them to enter loops. In fact, he earlier explains to Jacob that his ability to see hollows will evolve.

When they leave the loop, Millard navigates using Miss Wren's map. When they run into gypsies and are caught riding on their wagon, he plays a major role in their battle for freedom, hiding from sight while the others are captured. He sets off one of the peculiar chicken eggs to distract the gypsies from noticing him pick pocketing the key from them. When they are caught in the act of escaping, they all use their powers against the gypsies, Millard was seen throwing eggs at them and shouting ominous words of destruction. 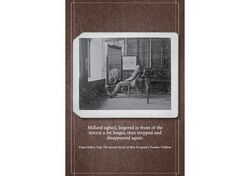 When Bekhir wishes for his son to be examined, Millard is invited to visit, along with Jacob and Emma. Millard sympathises with the boy, as he is slowly becoming invisible too, and he tells the young peculiar of advantages to being unseen.

Later, when on the train, he attempts to comfort Jacob about his nightmares. He is also seen studying the Tales of the Peculiar, quite interested in the loop locations hidden inside. He continues, expanding on his thoughts of the hollows having peculiars' second souls.

He also talks to Jacob of how he would have been a teacher, if not born the way he was. He also calls an attendant on the train pretty, causing Jacob to pity him, although he notices this by the way Jacob is looking at him, and doesn't appreciate it much.

Millard plays an important role in trying to phone a loop, although the plan failed as adults attempted to force them on a train. When that fails, they bring up the idea of entering a punishment loop. Millard panics at hearing this, explaining why it would be suicidal to do so. But, he comes up with the idea to capture a pigeon that will lead them to Miss Wren. He reads the story of the Pigeons of St. Paul's.

Later, when they do find Miss Wren and are examining the bodies of what are believed to be tortured peculiars, Millard begins investigation. He denies the claims of the peculiars from that loop, angering them. However, he proves his point, explaining his theory that the wights do not only need ymbrynes, but are stealing the souls of peculiars to use for themselves.

When the loop is taken over, Millard, along with the others, is taken captive by wights. After the fight at the train station, his whereabouts are confirmed to be with the captives as Caul "made sure he was accounted for as well."

After being rescued with all the other children he helped fight the wights and expressed the most concern when Miss Peregrine is captured (again). He tried to threaten Mr. Bentham into releasing Miss Peregrine by holding a knife at his throat, but backed off when Caul threatened Miss Peregrine in return and ran away. Later he shows Jacob's mom his invisibility to which she responds "You're not real" and stays with the other peculiars at Jacob's house.

Millard Nullings is a peculiar child who is invisible. To stay hidden from others he is almost always nude. Miss Peregrine makes him put clothes on from time to time.

Millard is 87 (though he tells Lilly he is 97 in A Map of Days) now 16 and has lived with Miss Peregrine for a great number of years. An estimated year of birth would be 1924, considering what year the book takes place in. He is one of the few characters who reveal their age to Jacob, the others being Enoch, Horace, Olive and Emma.

According to Jacob, Millard is a bit of a sycophant when it comes to the rules. He constantly refuses to help with plans and schemes, and he refuses to participate in what the other children view as fun. However, in A Map of Days, Millard willingly decides to come with Jacob and some others on their trip to rescue a peculiar child.

Millard has tendencies to not wear clothes, making him completely invisible, to, for one, sneak up on people undetected. Only Miss Peregrine seems to know when he is there, often reprimanding him for it ("Polite persons do not take their suppers in the nude!"). He also uses this to steal things, saying that pickpocketing is one of his talents. He does not quite see anything wrong with being invisibly nude, calling it "basic facts of biology."

Another one of Millard's main characteristics is his love for books and learning, saying he would have like to try his hand at teaching had he not been born with the peculiarity of invisibility. Studying the September 3rd, 1940 Cairnholm people for his loop life, he spent three years on observing the pigs alone (for which he was mocked by Hugh). Upon arriving at the mainland, he took the loss of the Map of Days very hard. He also spent his time on the train studying Tales of the Peculiar for its hidden meanings.

Although Millard says he likes being invisible and that is the very core of who he is, there are times that he wishes he could turn it off.

He is not always tactful when he speaks (being direct in his choice of wording as well as not being very quiet while the peculiars were talking about Fiona who they presumed to be dead, in earshot of an upset Hugh), and he is usually oblivious to emotional dynamics of a conversation. Jacob states that Millard doesn't lack feeling, but just isn't good at minding the feelings of others. However, he does have some tact, as he stays many steps ahead of Jacob and Noor after the three visit Klaus in order to not intrude on the pair's private talk.

Millard's peculiarity is the fact that he is completely invisible, a state that he is permanently in. However, he reveals in Hollow City that he was born completely visible but bit by bit began to fade away like Bekhir's son Radi.

To stay hidden from others he is almost always nude. Miss Peregrine makes him put clothes on from time to time but he seems keen on picking fights with her.

Despite having no control over his peculiarity, Millard is optimistic about his peculiarity and uses it to full advantage. He has been able to become a master spy, pick-pocket, and observer of things that he is studying.

Millard and Jacob are friends, although Jacob is no closer with Millard than he is with the other children. In the first book, his knowledge of the island impresses Jacob much to Millard's pleasure. In the second book they seem to bond a bit more, having personal and private conversations. Jacob soon pities Millard, because Millard has given up at hoping for a chance of having a normal life.

Millard is considered a suck up to Miss Peregrine through Jacob's eyes. Though Millard is completely invisible when nude, Miss Peregrine knows when he's around spying. She occasionally wrestles with him on this issue of clothes. Millard obviously cares for the headmistress, as he risks his own life to follow Dr. Golan and return her to safety, getting shot in the process. He showed more independence in A Map of Days when choosing to go behind Mrs. Peregrine's back and run off with Jacob and the others.

Millard and Emma are the first two peculiars Jacob meets in the loop, and their companionship is hinted, despite the fact they disagree upon whether Jacob is a wight or not. Although the two do have conflicting personalities, Emma still has a sisterly love for her fellow peculiar.

Millard met her at her and Noor's school. He said that he thinks that he is in love with her.